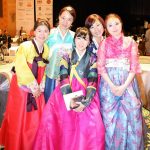 According to a legend, the first Korean nation existed 5,000 years ago on the northern part of Korean peninsula.  Son of God came with other gods, and married a bear who turned into a woman after eating only garlic and green onion in the cave for 100 days.  Koreans have developed unique way of life for over 5,000 years.  And their language is a part of that culture and is very delicate and unique.

People say Japanese might be worst translators not only because it takes so much time as they have to type in from 64 Hiragana and also numerous Chinese characters when translating from English to Japanese, but also because the syntax of Japanese is so different from English.  Korean is more or less the same, although King Sejong who invented 24 characters of Korean seems to have saved many translators of today.

While native Korean people learn English from kindergarten these days, and are very good in translating English into Korean which they practice so much at school, most are not very good in translating Korean to English.   First because syntax is different.  Order of Korean words are just the opposite of English word.  There are expressions that don’t exist in the other language.  And since Korean culture is not directed toward saying honestly what is on your mind, sometimes you have read between the lines to catch what it really means.  To make the problem worse, some Korean legal documents are just too long to translate into English, sometimes one sentence being two pages long.

How to choose the best Korean translator?  A native American would have hard time understanding Korean language, although there could be a few exceptions of those who read Korean newspapers and watched Korean movies and dramas and talked with their parents in Korean most of the times.  A native Korean who has MA or above, who majored in literature or was employed at a job requiring much writing like journalist or professor, and who lived in U.S. for 5 years or more, going to school and employed as professional, who had more than 5 years of experience in translation, is my ideal candidate for Korean translation.  Otherwise, there would be a lot of misunderstanding of the original, adding and deleting some words and phrases, and unnatural writing style.  With such serious documents as legal and medical documents that have impact on human life and liberty, we cannot afford poor translation.

It is obvious that machine translation has not been able to catch up with human mind that lived in both cultures and mastered the delicate nuance of the language.

Contact our Korean Translation Service Division today for top quality Korean to English and English to Korean translation and interpreter services for your legal, medical, technical and corporate documents. We sure know who is the best for you!